The 2013 Mini Cooper JCW convertible, and a guy named Marty

This is Marty. I met him one August evening when he spotted me pulling my Mini Cooper S JCW convertible test car into the parking lot of a local shopping plaza. Marty’s a British ex-pat, from the City of Oxford, where BMW builds the modern Mini Cooper. He likes the car for that reason, but also because (unsurprisingly) he’s a fan of British cars in general. Not that this one is actually British in any way but its name, but whatever: he’d never so much as sat in one of these cars, so I took him for a quick spin to show off how nicely it goes. 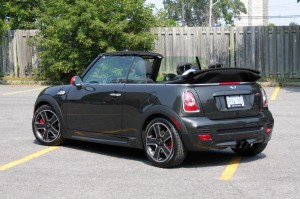 As a car reviewer, I’m supposed to be objective, but I was a car enthusiast first and I have no problem admitting that I *love* the Mini Cooper – even when it costs nearly $50,000, as this particular one does.

Outrageous price aside, a week with this one helped cement the Mini Cooper’s place on my short-list of cars I’d like to own at some point.

Posted by chrischasescars on August 23, 2013 in Convertibles, Mini