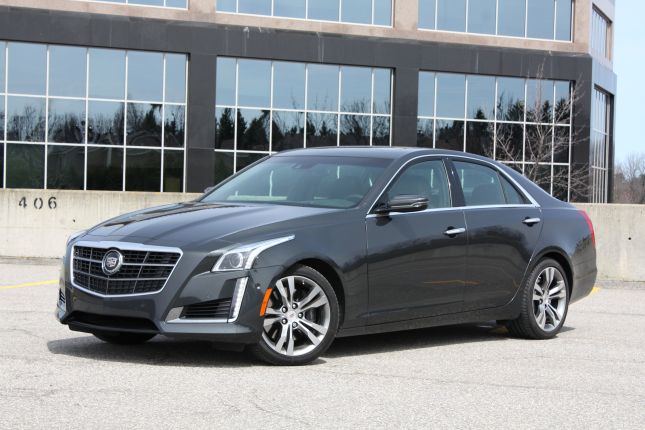 At one time, the Germans had a lock on the mid-size luxury/sport sedan segment: it just didn’t get better than a BMW 5 Series, an Audi A6, or a Mercedes-Benz E-Class.

It’s a different story now with the recent introduction of the third-generation 2014 Cadillac CTS. Through its first two generations, the CTS was a good car that never quite had what it took to unseat the Germans’ mid-size supremacy. But now, Cadillac has a sedan that could easily convert a loyal German buyer with a car that, simply put, feels pretty German.

I drove a CTS in V-Sport trim, which tacks a couple of turbos onto the available 3.6-litre V6, to create a hot, hot car that is surprisingly easy to live with.

Getting big power out of a medium-displacement engine is no stretch any more, thanks to modern turbocharging tech; putting that power in a car that feels as well-suited to the rat race as it does the race track is another matter, and that’s where Cadillac has truly succeeded.

I often scoff at cars with adjustable drivetrain and chassis settings. It seems like a cop-out that lets engineers get around the work of creating a solid all-round car. Too often, none of the available settings do anything just right: either the suspension’s too soft and throttle response too lazy, or the ride becomes uncomfortable and the throttle too touchy. So, credit to Cadillac: the V-Sport includes such a system, and while I find it superfluous as ever, select the “sport” setting and you get a near-perfect balance of ride comfort, handling and, in particular, perfectly-tuned throttle response.

Hit the gas, wait out the half-second of turbo lag, and revel in how the car surges forward on a tide of torque. This isn’t the first sedan to do speed well, but it’s the manner in which the car delivers it that’s so impressive. The rear-end squats—just a little—and the car hauls arse against a backdrop of one of the most intoxicating six-cylinder exhaust notes I’ve heard in some time. The V-Sport handles brilliantly as well, thanks in no small part to the adjustable suspension, which limits lean in turns and controls body motions over rough pavement.

It accomplishes all of this with poise—quite a feat, given that this car doesn’t even enjoy the traction benefits of all-wheel drive, usually a requirement for making a high-powered car enjoyable in hard-charging.

In a week of enthusiastic city driving—this much power really does corrupt when it feels and sounds this good—my test car averaged better than 15 L/100 km, an impressive number for a 420-horsepower car.

Factor in the $75,000 price tag for my V-Sport tester, and you’re looking a true performance bargain when stacked up against the likes of a BMW 550i, Audi S6 or a Benz E 550 (all of which come standard with all-wheel drive, by the way). Cadillac is doing a lot of things right at the moment, but nothing in its lineup is more right than the CTS V-Sport.

Posted by chrischasescars on September 2, 2014 in Cadillac, What I Think

What I think: Buying a used Cadillac STS

The 2005 STS brought rear-wheel drive performance back to Cadillac’s full-size sedan range. It was a promising move, but a few years later, it seems that this car doesn’t hold up its end where reliability is a concern. Click here to read my Autos.ca Used Vehicle Review.