I’ve always liked little cars, but never before have they been so easy to like. The fourth-generation, 2012 Hyundai Accent is among the latest in a litany of likeable subcompacts.

Good first impressions come courtesy of the all-new styling. It’s enough to get people asking what that sharp-looking little car is, but follow-through is important too, and Hyundai has worked hard to give this car the goods it needs to impress outside the showroom. As last year, hatchback and sedan body styles are available, but the hatch now has people doors for four.

Key among the updated goods is a new engine. It’s still a four-cylinder and displaces 1.6-litres, just like the motor it replaces, but it employs newly-commonplace direct fuel injection technology (fuel is squirted straight into the cylinder instead of being added upstream in the intake) to boost both fuel economy and power.

Power figures are 138 horsepower and 123 lb-ft of torque, both big increases over the 110 and 106, respectively, of the 2011 model. This car feels stronger than the one it replaces, but in absolute terms, it’s better defined as zippy, rather than fast. It might feel fast, though, if automotive evolution didn’t dictate more weight; my GLS hatchback tester is an easy 250 pounds (about 115 kg) heavier than last year’s model.

Even with the new motor’s extra power working against the car’s weight gain, fuel consumption is lower compared to 2011. With the manual transmission, Natural Resources Canada’s ratings for the Accent are 6.7 L/100 km in the city test and 4.9 in the highway evaluation, down from 7.2/5.7. My tester averaged 7.8 L/100 km in real-world city driving in and around Ottawa.

Hyundai’s suspension tuning is near-perfect and much better than the too-soft setup in the outgoing model. It’s no sports car, but the Accent feels light on its feet in corners and displays good balance as long as you stay within the car’s roadholding envelope, which is more generous than expected in an economy car. One complaint is the rear suspension’s tendency to sidestep over sharp bumps, giving the car an unsettled feel, especially in mid-turn. The Accent’s not the only Hyundai guilty of this; the Elantra does it too. 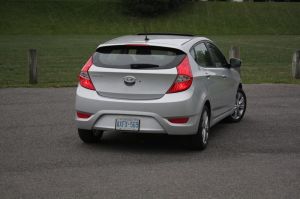 Six-speed transmissions are quickly becoming the default across the auto industry; the Accent can be had with either a manual or automatic, both with a half-dozen gear ratios. The shift lever is a nice piece, moving easily and accurately between gears. The clutch is light and makes this an easy car to drive smoothly.

This is a great example of an inexpensive car that’s still fun to bomb around in when the mood takes you. The motor revs smoothly and sounds decent when pressed; the mechanical refinement found here is far improved from last year’s model, and worlds better than earlier examples.

The Accent’s interior lines are straightforward without being boring, and the design looks like it will age well. The materials are fine, a mix of plastics ranging from the nicely textured dash top to some cheaper-looking silver trim. More notable were the Lexus-quality panel fitments, with narrow, even gaps all around. The undamped grab handles – they snap back against the headliner with a thud when released – are a cheap touch, but no doubt a cost-saver for Hyundai. 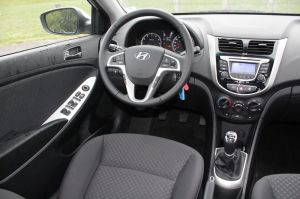 The front seats are comfortable and even offer a bit of lateral support for hanging on in spirited cornering. The driver gets a height adjustment, but it’s a single up-down lever; last year’s seat was better for allowing the front and rear of the bottom cushion to be adjusted separately. Drivers with long legs will find lots of room for those, but headroom is only okay with the optional power sunroof stealing some. The steering wheel adjusts for tilt but not for reach; the relationship between the wheel and pedals is such that I didn’t have a hard time getting comfortable, but your mileage may vary.

Rear seat space isn’t world-beating, but there’s enough room in the surprisingly comfortable outboard chairs for two to ride for a couple of hours without complaint. The floor is nearly flat (there’s almost no hump in the middle), so while a third passenger is a squeeze, at least there’s a proper place for that person’s feet. That said, there could be more toe-room under the front seats for outboard passengers. 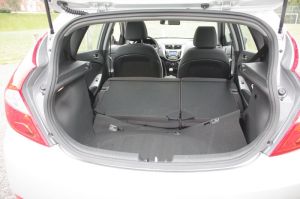 The rear seat folds in a 60/40 split, but cargo-conscious shoppers will be disappointed that folding it doesn’t provide a flat load-in surface. Practicality is compromised, too, by a small trunk opening and a pretty high liftover height, but more so for removing bulky items; the trunk floor is a good eight inches below the bottom of the cargo door.

Accent pricing starts at $13,199 for a sedan in basic L trim; the base hatch is a few hundred bucks more. My hatchback tester in top-line GLS trim (offered on both sedan and hatch models) is worth $17,199; choosing the automatic transmission adds $1,200. For that price, the Accent comes with power windows, locks and mirrors, air conditioning, steering wheel-mounted audio controls, cruise control, heated front seats, power sunroof and fog lights. The basic safety package in all models includes active front headrests, stability and traction control and six airbags.

I’d say Hyundai nailed what really counts in this class, which is making a simple and inexpensive car that lives up to its fuel efficiency promises. A few annoyances remain even after the major 2012 redesign, but all the good stuff added in that redo make this an easy car to like.

This review was previously published in the Montreal Gazette.

Posted by chrischasescars on September 20, 2011 in Compact cars, Hyundai, What I Think