RSS
← Nuts and bolts: Choosing the 2012 Canadian Car of the Year
What I think: Buying a used Saturn Astra →

What I think: 2012 Hyundai Veloster 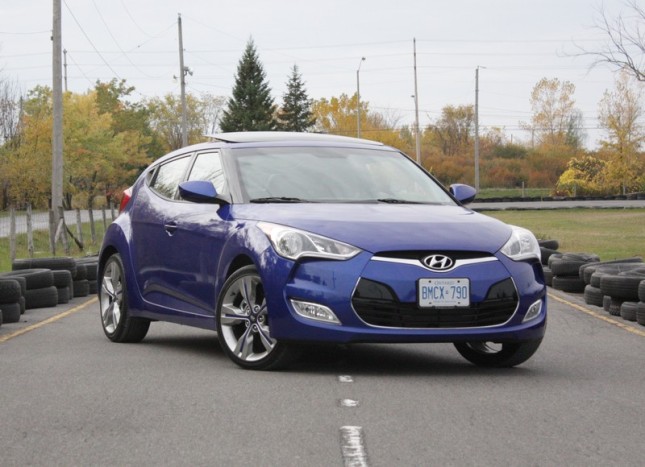 In the past, upscale, stylish compact hatchbacks have, naturally, been the exclusive domain of upscale manufacturers. That changes, now, with the introduction of the Hyundai Veloster, a car that pitches the Korean manufacturer into the same arena as cars like the Mini Cooper and Volvo C30.

Hyundai was apparently not convinced that a sported-up version of its Accent would be up to that task, and I tend to agree; it’s a good car, but the name carries too many economy-car connotations to carry much weight in that league. So, while the Veloster comes to us riding on lightly modified Accent underpinnings, the look of the car (obviously) is unique. What Hyundai hopes is that the Veloster feels different enough compared to the Accent to be taken seriously when run head-to-head with an established premium small car like the Cooper, C30, or even a front-wheel drive Nissan Juke. 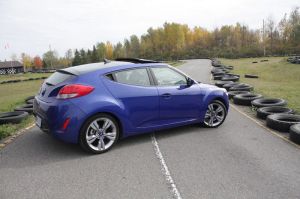 The starting point is Hyundai’s usual tack of loading the Veloster with standard features while keeping the price low. For a starting MSRP of $18,999 ($600 more than the priciest Accent hatchback), the base Veloster comes with a six-speed manual transmission and the same 1.6-litre, four-cylinder engine used in the Accent. Standard equipment includes power windows and locks, air conditioning, heated front seats, Bluetooth, cruise control, intelligent keyless entry and pushbutton start and power/heated outside mirrors. Most surprising, though, is the inclusion of a rearview camera, something generally unheard of in a compact car.

My tester was the more-expensive Tech Package model, which adds leather-trimmed seats, automatic headlights, panoramic sunroof and 18-inch wheels (replacing 17s), for $22,499. No surprise, that undercuts the Mini Cooper by several hundred dollars and the C30 by thousands. 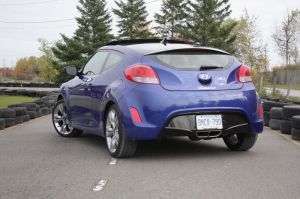 A six-speed double-clutch automatic transmission is a $1,400 option in either trim.

The Veloster was named Best New Sports/Performance Car (under $50,000) in the Automobile Journalists Association of Canada (AJAC) 2012 Canadian Car of the Year voting, a result based mostly on its budget price; it outscored the dynamically-superior Volkswagen Jetta GLI by three points.

What may be the Veloster’s most unique feature is its asymetrical three-door bodystyle, which puts a single rear door on the passenger side of the car, along with making the driver’s side door longer, to ease access to the two-person rear seat from that side. By design, that suggests the rear seat is intended for occasional use only, and in practice that proves, mostly, to be the case. The slope of the roofline means that getting in through the rear door is an exercise in not smacking one’s head; gaining access from the driver’s seat is even more of a contortionist act, as the driver’s seatback flips forward but doesn’t slide to move further out of the way. The driver’s seat doesn’t return to its original position when it’s pushed back.

Once inside, headroom is very tight with passenger’s heads resting under the leading edge of the hatch opening; a label on the inside of the hatch warns to be careful when closing the hatch when someone’s in the back seat, to avoid beaning them with the cargo door. Aside from that, the rear seat is surprisingly comfortable, with supportive seats and decent legroom.

An amplifier for the stereo lives under the front passenger seat, and is visible from the rear if the passenger chair is slid far enough forward. Give the Veloster a couple of winters in Canada to see if salt-laden snow from winter boots will cause problems with that component.

The trunk measures out to 440 litres in volume – only a little shy of the 487 in the Accent hatchback. The rear seats fold (flatter than in the Accent, it seems like) to expand cargo space. I volunteer with a local food bank, collecting food donations from grocery stores, and four full shopping carts worth of food fit with ease, with the rear seatbacks lowered.

Despite the Veloster’s rakish back end, visibility rearward isn’t that bad. The view straight back is fine (better with the rear headrests removed), but the huge C-pillars create large blind spots when changing lanes.

The Veloster’s interior materials are almost as nice as those in the Mini Cooper, but not quite, and there’s a much bigger discrepancy when comparing the Volvo. The plastics here are hard, and the silver painted trim looks nothing like the real metal it wants to be, and there are a few suspect-looking panel fits, mostly in the rear seat area. Still, the controls are easy to figure out and none of the buttons or knobs feel cheap.

The Veloster rides on a modified version of the Accent’s platform, and gets a unique rear suspension with a thicker stabilizer bar, plus sport-tuned power steering, a quicker steering ratio, bigger front brake rotors and a stiffer suspension. Even with a few weeks between testing the Accent and Veloster, the differences in the Veloster’s steering was obvious right away. It makes the car more responsive, but also darty on the highway, especially in strong crosswinds. On a minor point, I’d have liked a thicker steering wheel rim.

The Veloster’s handling is well-balanced, though it will, predictably, understeer when powering through corners. The firmer rear stabilizer bar makes a notable differnce compared to the Accent, but the rest of the suspension – and this is rare – left me wanting a firmer ride. It also left me wishing Hyundai would do something to eliminate the tendency of its small cars’ rear suspension to skip sideways over rough pavement, even when the car’s moving in a straight line. The Elantra, Accent and now Veloster that I’ve tester have all done this, and it makes the chassis’ feel underdeveloped. Enthusiasts may also find fault with brake and gas pedals placed too far apart for easy heel-and-toe downshifting, and a slightly spongy brake pedal. The bigger front brake rotors make a difference, according to AJAC performance test results, that show the Veloster stopping in 42 metres from 100 km/h, while the Accent takes 45.1 metres to stop from the same speed.

Getting the Veloster up to speeds where handling matters takes determination from the 1.6-litre engine, shared with the Accent. Its 138 horsepower and 123 lb-ft of torque are big numbers for a subcompact car, but not big enough to make the Veloster fast. The upside is the motor’s smooth and eager nature when pressed for power. You can look forward to a future version of this car with a turbocharged 1.6-litre making about 200 horsepower. Providing the suspension and steering are up to the task of putting that much power to the ground through the front wheels, a Veloster Turbo will be a hoot.

There’s plenty of road noise to be heard at highway speeds, and rough surfaces send clunky noises through the car’s underpinnings and up into the cabin; blame the 18-inch wheels on my tester for some of that (17s are standard).

A light shifter makes the manual transmission easy to use; shift throws are shorter than in the Accent and gear engagements are cleaner, but the short travel clutch took a couple of hours of getting used to before I got good at making a smooth go of it. 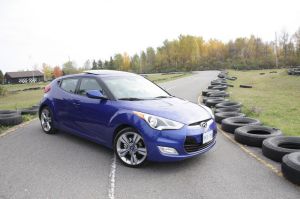 I make a point of telling people that expectations have to be adjusted when considering what a unique-looking, budget-priced car is going to offer in terms of interior fittings and driving experience. Predictably, given Hyundai’s recent track record, the Veloster is an impressive car for the price and deserves a look if you’re considering cars like the Cooper or C30. Keep in mind, though, that for the Hyundai’s budget price, you’ll be giving up performance (at least in terms of handling) to the Mini and interior quality to the Volvo. And don’t forget the Juke, which is similarly-priced in its front-wheel drive trims, and surprisingly entertaining for a tall-riding crossover.

The Veloster brings a lot of style to the low end of Hyundai’s lineup, but despite its Canadian Car of the Year category win, its performance doesn’t set it apart enough from the too-similar Accent. I suspect next year’s turbocharged model will make a better case for itself as an entry-level performance car.

← Nuts and bolts: Choosing the 2012 Canadian Car of the Year
What I think: Buying a used Saturn Astra →

One response to “What I think: 2012 Hyundai Veloster”