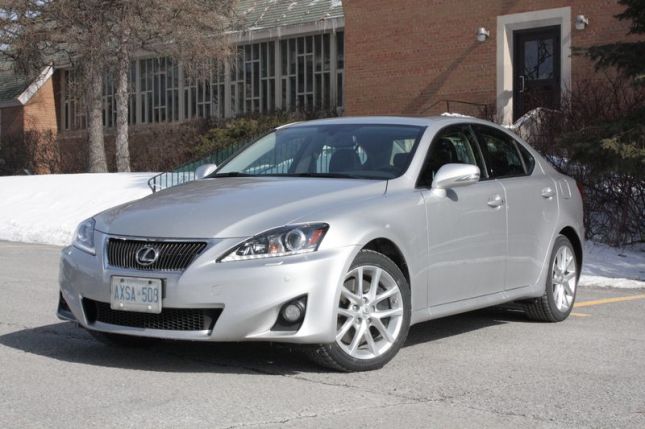 I am neither tall, nor do I possess the financial fortitude necessary for luxury car ownership. Presumably, though, there are many non height-challenged drivers who have the cash for a cushy car. If you are one of them, let me take the opportunity to tell you that the sedan you see here — the Lexus IS 350 AWD — is not the car for you.

It’s not that this car isn’t well-appointed (it is), and it’s not that it doesn’t perform well (it does). It’s that for $45,000 (not including extras included in my test vehicle), there’s not a whole lot of interior space to speak of.

Now, I know this is a sport sedan, and not all sport sedans are used as family cars and grocery getters. However, if you ask me, any car with four doors and a trunk (which is a pretty big percentage of the cars on our roads, you may have noticed) should work well as a daily driver, regardless of what kind of buyer its maker has in mind.

The IS can accommodate adults in the front or the back seat, but not both at the same time. So, if you’re an adult of average height and you find yourself about to take a coach-class ride in this car, hope like hell that a child (or very non-tall adult) is doing the driving, or you’ll spend the trip with your knees under your chin.

Up front, you’ll find comfortable seats and a tilt-and-telescoping steering wheel that make it easy to find a comfortable driving position. Still, I’m five-foot-seven in thick-soled shoes, and even my head was less than an inch from the headliner. It bears a mention that the optional sunroof in my test car stole some headroom, but this is a situation I’ve noticed in every Lexus sedan I’ve driven, with the exception of the luxo-barge LS.

Maybe one of the IS’ competitors could boast interior fit and finish worthy of a luxury brand, because my Lexus tester could not. The union between the centre stack and surround dashboard was uneven and sloppy-looking to a degree not common in sub-$20,000 Korean cars. Remember how Japanese cars used to be held up as a benchmark for quality? Those days are long gone.

Other, smaller, nits I have to pick include the lack of a folding rear seat, a design “feature” common to many luxury/sport sedans of Japanese origin. I’ve said this many times, and I’m not afraid to sound like a broken record: if you want a luxury sedan that’s also truly practical, you have to spend more and buy German. Also, the IS’ climate control system’s automatic function has no concept of the need to keep the windshield and side glass defogged. I wound up controlling airflow manually, which brought its own frustrations, because the only way to control the fan speed is by calling up the climate controls on the touch screen and then selecting the speed you want, turning what should be a simple touch of a button or twist of a knob into a two-step process. There are already enough potential distractions in driving a modern car, Lexus, so do us a favour and keep the simple stuff simple.

Now that I’ve blasted this car to smithereens, a few notes on what’s good about it.

It’s quick — Toyota’s 3.5-litre V6 makes 306 horsepower in this car — and surefooted, thanks to an all-wheel drive system that was only added as an option with this big motor last year; previously, it could only be had with the relatively unimpressive 2.5-litre engine in the IS 250. It was a strange omission considering how popular all-wheel drive has become in big-engined versions of competitors like the BMW 3 Series, Audi A4 and Infiniti G37. Also strange is that the addition an AWD option in the 3.5-litre version of this car comes a small eternity after the car’s last redesign (in 2006), and (probably) so close to the arrival of the third-generation model.

The IS is a sharp handler, with reasonably-satisfying steering and brake response. It’s not as entertaining at its limits as the 3 Series is, but is still a fun car for the occasional blast around a highway on-ramp or suburban backroad.

Toyota (and Lexus, by extension) is known for its know-how in fuel-efficient engines, and the 3.5-litre is, generally, impressively efficient considering its power output. Natural Resources Canada estimates for the IS 350 AWD are 11.4 L/100 km in the city and 7.8 L/100 km on the highway. NRCan’s test procedures are unrealistic, though, and fail to take into consideration things like real city traffic and cold weather; my test car averaged 13.8 in mostly city slogging punctuated with a couple of relaxed drives along lightly-used secondary roads.

This least-expensive Lexus sedan starts at $32,900 for the IS 250 with rear-wheel drive and a manual transmission. The IS 350’s larger engine can only be had with the automatic transmission (it’s the better of the two; the IS’ stickshift is one of the worst in the business), and comes in at $44,950 with all-wheel drive (the rear-drive IS 350 comes standard with a bunch of stuff that’s optional in the AWD model and so is worth more than $51,000 to start). My IS 350 AWD tester had a $7,900 option bundle that included navigation, upgraded 14-speaker stereo, power steering wheel adjustment, sunroof, heated and ventilated front seats, and front and rear parking clearance sensors (among other things), and priced out to an eyebrow-raising $55,000, including the $1,950 freight charge.

The IS is not a one-size-fits-all proposition, in more ways than one.