If you want to know why auto-industry insiders think small SUVs will soon run compact cars into the ground, you don’t have to look much further than Nissan’s lineup. The Japanese company helped kick off the small-crossover craze with its oddball Juke in 2011, but has recently committed to a more mainstream approach signaled by the Juke’s forthcoming replacement with the Kicks, and the arrival of the Qashqai you see here.

Nissan has sold the Qashqai in Europe and elsewhere for a number of years, and while the name is new to us, this little utility shares its underpinnings with the familiar Rogue, a vehicle that lives at the large end of the compact-crossover spectrum and has done very well for Nissan in North America.

The Qashqai’s basis on the nicely-sorted Rogue is a good starting point that makes it a smooth driver, though more road and wind noise gets into the cabin than we remember from our last Rogue test drive.

Doing the work is a 2.0-litre that makes 141 hp and 147 lb-ft of torque. With that motivation under the hood, performance is fine, but you’ll get more straight-line satisfaction from stronger competitors like the Fiat 500X (180 hp) and Mitsubishi’s RVR (optional with 168 hp).

And while the Volkswagen Golf wagon is not technically a crossover, its Alltrack AWD option positions it as a competitor to cars like the Qashqai, while offering both more power and interior space.

Basic front-drive Qashqai models come with a manual transmission, but the continuously variable automatic (CVT) is mandatory with AWD. It’s not an exciting way to put power to the road, but it does so while mimicking the stepped gear changes of a traditional automatic and avoiding the droning engine note that annoys us in many other CVT-equipped cars.

While I normally ignore eco-minded drive modes, in the Qashqai this feature softens jumpy throttle response and makes it easier to drive smoothly. All we wished is that the car would remember which setting was engaged when the car is turned off; the button is awkwardly placed down by the driver’s left knee, which proved a pain given that we used it every time we started the car.

Button placement aside, if the idea behind it is to make the Qashqai more fuel-efficient, our test was inconclusive, because cold weather bumped fuel consumption to an average of nearly 11.0 L/100 km in mostly highway driving — much higher than Nissan’s estimates of 9.1/7.5 with the optional all-wheel drive system. That said, the AWD worked well during a week spent in the Laurentian Mountains north of Montreal, including the aftermath of a 20-cm snowfall.

Nissan says a FWD model with the CVT is nominally more efficient than my AWD tester, but given my experience with other vehicles offered with both types of drivetrains, a front-drive model could turn out to save more fuel in real-world driving than those estimates suggest. 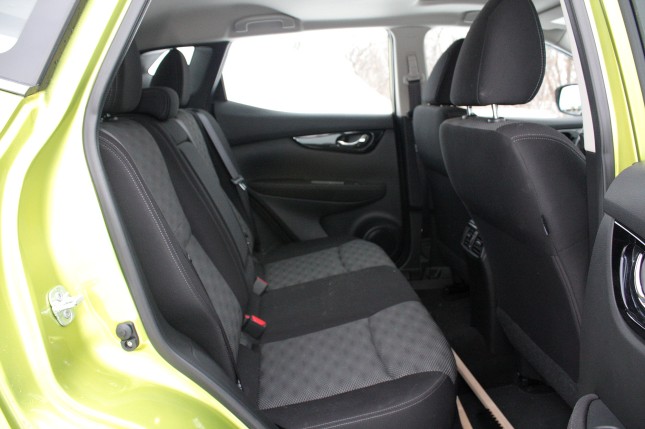 Despite its small footprint, the Qashqai is plenty roomy (bulky winter clothing notwithstanding). Two of us were cozy but not cramped in the front seats, and the rear bench offers perfectly useful head- and legroom for adults, including lots of toe room under the front seats. Predictably, cargo space is limited, but the trunk floor can be adjusted downward a couple of inches to add a few valuable litres of volume. 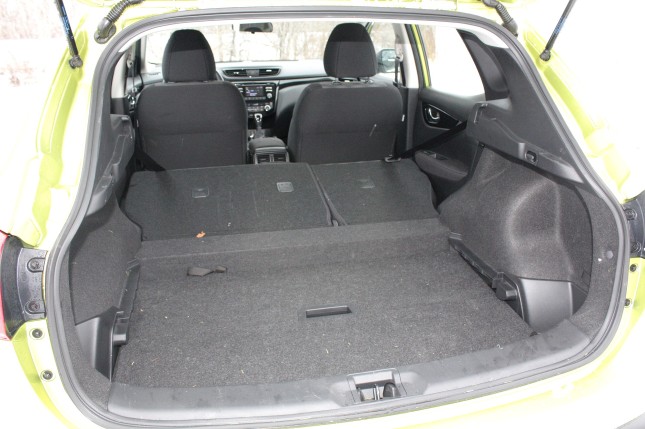 Our test vehicle was the mid-range SV trim with AWD, a $26,798 vehicle that includes niceties like heated front seats and steering wheel and dual-zone automatic climate control. If you want a touchscreen-based infotainment system, you have to spring for the $29,498 SL trim, which also gets navigation and leather seating.

As good as I remembered the Rogue being when I last drove one in 2013, I wondered if the mechanically similar Qashqai would feel dated next to other automakers’ more modern crossover designs. Not at all: This is a nicely done little utility that I think buyers will find just as easy to live with as the Rogue. All I’d suggest is that if fuel economy is a priority for you, think hard about how much you need four-wheel traction.

Posted by chrischasescars on January 7, 2018 in crossover, Crossovers/SUVs, Nissan

Just like the title says: Clarkson pits the GT-R against Australian Olympic track-and-field athlete Michelle Jenneke. One of the racers is cute, and it’s neither Clarkson nor the GT-R…

Posted by chrischasescars on September 3, 2014 in Random, Video

Nissan’s Altima doesn’t have the brand heritage that the Honda Accord and Toyota Camry possess in the family car segment, but Nissan must be doing something right: in 2011, the Altima outsold both of those cars.

Good news for Nissan, but all three of those cars were redesigned recently: the Camry for 2012, and the Accord and Altima this year. Given the improvements that Honda and Toyota have made to their family sedans, Nissan had some work to do to keep the Altima in the game.

Looks are important in any car segment, but are not paramount to success for a family car. The 2013 Altima does away with the frumpy look of the outgoing car, replacing it with a design reminiscent of a generation-old Lexus ES. Classy, but unexciting.

On the other hand, the interior design has been dumbed down, in my opinion. It looks fine and works well enough, but has a cookie-cutter look to it, where the old Altima’s interior neatly incorporated stylistic elements borrowed from the sporty 370Z coupe. Sporty isn’t what family sedans are about, so the 2013 Altima edges closer to the automotive equivalent of sensible shoes.

One of the most important parts of any car is a set of sensible seats. Nissan co-developed the Altima’s front chairs with NASA. These “zero gravity” buckets are presumably comfortable for someone, but not me; they hurt my back and made me glad I wasn’t doing any long-distance travel in this car. Balancing out the weirdly-shaped backrest was a soft bottom cushion. (At least one part of my backside was well taken care of.) 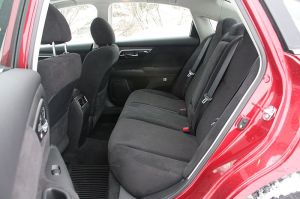 The rear seat cushions are similarly soft, but here, the backrest angle is raked a few degrees too far back. It’s great for napping, but less so for those following mom’s advice to sit up straight.

Headroom is more generous here than in the new Accord, but that car feels roomier overall. The Altima boasts similar trunk space and trumps the Accord by including a split-folding rear seat; in the Accord, you either fold all of it, or pay someone to deliver your Ikea purchase.

I was less impressed with the Altima’s interior quality. To be fair, everything looks good, and the materials mostly feel like they belong in a $30,000 car, but the dash generated a couple of buzzy, creaky noises that didn’t go away once the car was warm. A speaker grille in the top of the dash – front and centre for all to see – was poorly fitted, looking like it had warped slightly over years of exposure to hot sun, but my test car had just 4,000 km on its odometer.

Nissan’s 2.5-litre four-cylinder is the volume seller in this car, and it boasts a nominal power increase to 180 hp for 2013. It’s not a sweet-sounding motor, so it’s best that the continuously variable transmission (CVT), standard in all Altimas, is good at keeping engine speeds well below the “buzz point.”

Nissan is known for CVTs and says this one has been redesigned with a view to reducing friction and increasing efficiency. The company’s fuel consumption claims are 7.4/5.0 L/100 km (city/highway); those are very impressive numbers that my test car didn’t stand a chance of matching in a week of cold, snowy weather, instead averaging just below 10 L/100 km in city driving.

I’ve long liked Nissan’s CVTs, but have found in the past that they favoured refinement over performance, so the cars felt slower than their power numbers would suggest (even if that was just a seat-of-the-pants perception). This Altima felt more responsive and eager to let the engine spin when acceleration is called for. 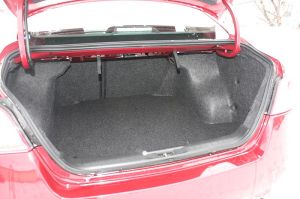 The ride is fabulous, a near-perfect balance of comfort versus body control that trumps the Accord’s too-firm suspension tuning. Steering response is decent, but the electro-hydraulic power assist is a bit over-boosted; that’s a good thing at low speeds (like parking lot crawling), but makes the car feel less poised at highway speeds. Plus, the steering feels a bit “off” in sweeping corners, where Nissan’s Active Understeer Control kicks in to help keep the car on course. The company says it’s “almost undetectable,” but I detected it, and I didn’t like it. It sounds like a feature meant to augment performance at the car’s handling limit, but Nissan says its aim is to help improve steering accuracy in normal driving. Here’s something else I detected: Nissan overthinking the steering system in a family car.

No doubt, the Altima continues to be a good car. Its problem, following this redesign, is that it is neither as cushy as the latest Camry, nor does it boast a personality as sharply defined as the new Accord’s. It tries to strike a balance between the two, and mostly succeeds, but not comprehensively enough to make this a great car.

Posted by chrischasescars on January 31, 2013 in Nissan, Test Drives, What I Think

What I think: Buying a used Nissan Quest

The third-generation Nissan Quest was a styling standout among a stodgy field of minivans, but it’s also a lesson in why standing out is not always worthwhile. Click here to read my Autos.ca Used Vehicle Review.

Posted by chrischasescars on June 12, 2012 in Autos.ca, Minivans, Nissan, Used vehicles, What I Think