1. That’s near Seattle, right?
Tacoma. Colorado. Canyon. Sierra. Silverado. Dakota. Is there a rule that pickups have to be named after American places and geological formations?

2. Don’t call me small
The Tacoma is smaller than the brand’s full-size Tundra (see what we mean about names?), but they refer to it as “mid-sized.” This is the Double Cab version; the base Access Cab model also has four doors, but the back ones are smaller and the tiny rear seats useless.

3. A step in the wrong direction
OK, let’s get in the truck – but watch out: the side steps are too high and just get in the way, and once you’ve climbed up, you have to duck down to avoid whacking your head on the door frame. 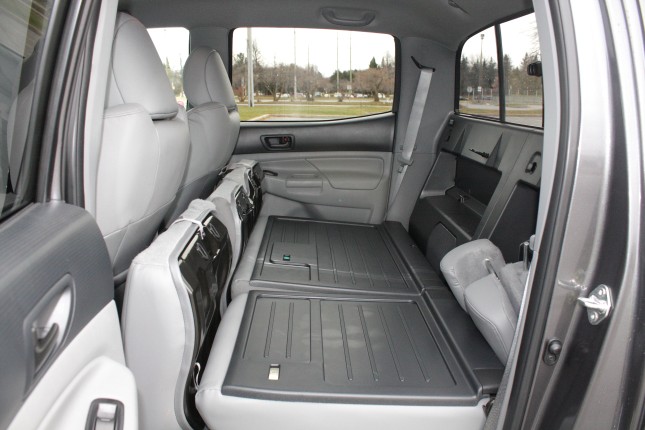 4. It’s raining on my groceries
For stuff you don’t want exposed to the elements, the back seats fold to create a flat load surface. You have to remove the headrests first, though, and there’s nowhere to stow them.

5. Get into bed
For less-perishable cargo, there’s the bed. Curiously, Double Cab trucks with a manual transmission get a five-foot bed, while the automatic version I drove has one that measures a little longer than six feet. The bed was just a bit shorter than the junk I had to haul to the dump. (Of course it was.)

6. Rough, going
Many modern trucks ride surprisingly smoothly, thanks to sophisticated suspension designs, but Tacoma’s decade-old design barely qualifies as modern, and shows its age in the poor ride quality. 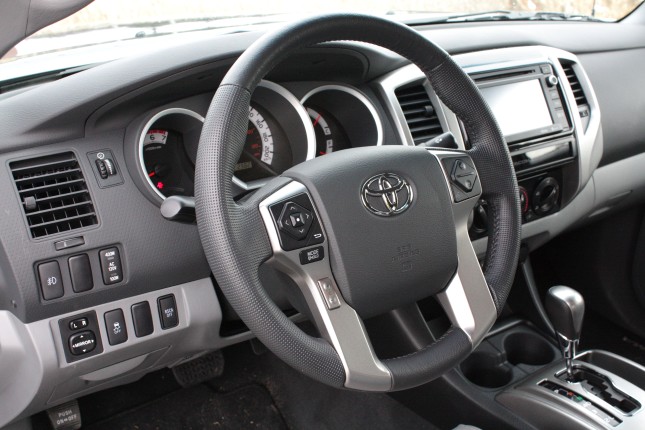 8. Priced to stay put
Pricewise, at $40,000, my top-of-the-line test truck lacked many creature comforts. I’m okay with a basic truck, but similar money will buy you a V8-powered, full-size truck that will tow and haul more weight. Oh, well. Maybe if they’d called it the Seattle.

Posted by chrischasescars on December 1, 2014 in Straight Eight, Toyota, Trucks